The red pandas (Ailurus fulgens), unlike the black and white giant panda bears are pandas that grow to the size of a typical house cat and look like a cross between a cat, raccoon and panda. Including the tail length, red pandas grow to about 42 inches in length and weigh about 7-14 pounds. These animals are reddish brown in color with white and black markings. Their bellies and legs are black in color, while their tail is thick, bushy and ringed. Red pandas are enveloped in a soft covering of fur, which extends even to the soles of their feet, thereby enabling them to keep warm at high altitude habitats. Found in the mountains of Nepal, India, China, Bhutan and Myanmar, these pandas live in the trees there. Red pandas are excellent climbers and also use a thumb like bony protrusion to climb trees. As far as habitat is concerned, both red panda and giant panda habitat are the same.

Red pandas use their long, bushy ringed tails to balance themselves on trees. They also use their tails to cover themselves during the cold winter months. Thus, this tail acts like a cozy blanket for the pandas in cold weather.

The panda’s red and white markings on the fur blend in perfectly with the white lichens and red mosses growing on trees where they dwell. This helps them hide from their predators like the snow leopards and martens.

In captivity, red pandas live to a period of about 14 years. However, in the wild, these red pandas manage to survive for only 7-8 years.

The name ‘Panda’ stands for the Nepalese word for red panda – “Nigalya poonya”, meaning ‘eater of bamboo’. From this fact itself we know that red pandas are fond of bamboos. Using their extra thumb, these pandas grab onto the bamboo stems and devour about 200,000 bamboo leaves a day. Their strong teeth and jaws enable them to munch comfortably on the tough leaves and stalks of bamboo. However, unlike the giant panda that only relishes bamboo leaves, these red panda are also quite fond of blossoms, bird eggs, berries, fruits and various other plants with small leaves.

Adult pandas are solitary animals and come together only during the breeding season, which is in late fall during the winter. After a gestation period of 134 days, one to four young pandas are born. The newborn pandas are covered in thick, gray fur with closed ears and eyes and weighing only 4-5 ounces. After nesting for 90 days, the little pandas stick around their mothers until the next breeding season, by when they would have attained adult size.

The sad part is that there are only about 2500 red pandas present on planet Earth. Man has ventured and destroyed their habitat, thereby leading to the depletion of their numbers. Moreover, being hunted down for their fur to make hats, etc. has caused panda numbers to plummet terribly.

These furry animals making squeaks, chattering and chipmunk like sounds are simply adorable. In fact, sometimes these pandas also give off warning whistles. However, looking at the present condition and the speed at which red panda habitat is being devoured for selfish gain, it will not be long before these lovely, furry friends are forced to extinction. Hope this article on red panda facts was informative and helpful! 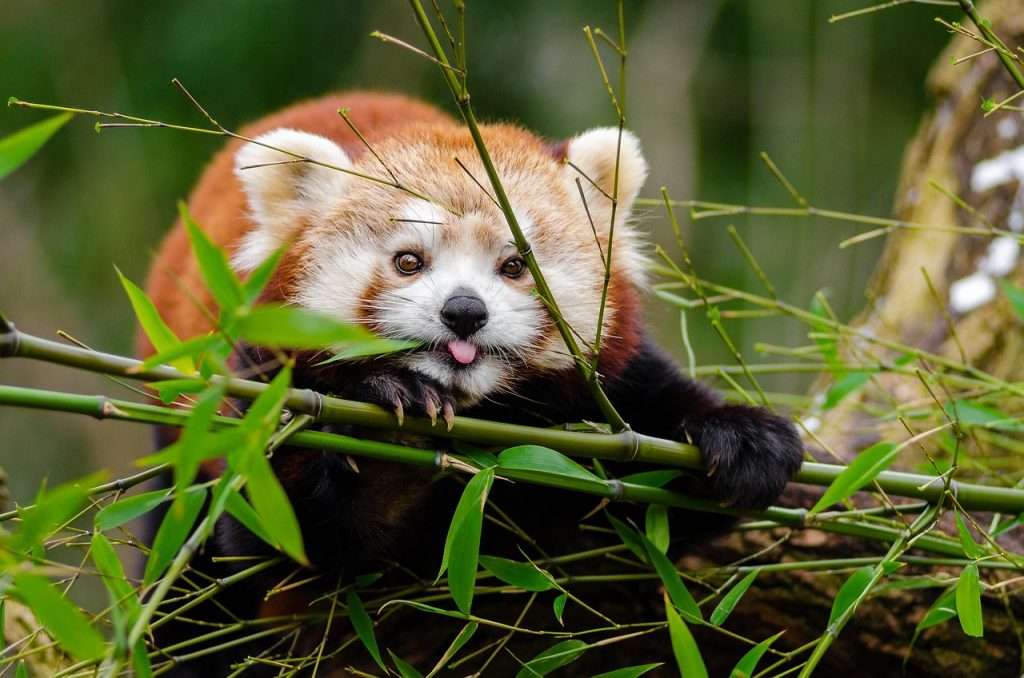